In my last post on Tuesday I gave you an idea of the weird I am now; I have toys. Lots and lots of toys. And I’m winning. Not in the Charlie Sheen kind of way, more like the Rotty kind of way.

But I wasn’t always winning. I guess to be a winner you have learn to be a loser first.

Like lots of kids, I looked kind of funny, which made me terribly uncomfortable in social situations. I had a unibrow that I wasn’t allowed to split until I was in seventh grade. I also wasn’t allowed to shave or wear pantyhose until then either, which meant I gave up on shorts and dresses and staying over at friends’ houses. I had teeth with gaps so wide I could slide my tongue between them. My skin started breaking out early, which was bad enough, but other kids actually accused me of thinking I was a big shot because I had something everybody else didn’t get until they were teenagers. (Yeah. Zits.) I was flat-chested and never grew out of it. I had (and have) nine toenails. One just decided it didn’t want to grow any bigger than a pinhead. Swimming in public (meaning, without shoes) just wasn’t happening for me.

Adding to my self-conscious looks was my abnormal interests. I didn’t like shopping with my friends. I didn’t really know how. Their moms would take us to look at clothes, and I would follow them around the store without looking at anything. I would have rather been playing baseball with my uncle, which didn’t go over well with the girls I knew. I played drums, I didn’t want to wear makeup, and I certainly didn’t like talking on the phone.

To fit in, I found myself trying to be smart and funny. Smart and funny for me combined into smart assiness and, at the time, that didn’t help. As I grew older, I realized the people I considered to be my best friends all those years all considered somebody else to be their best friends. And that hurt.

So I withdrew inside my little world. I became quiet and observant and geeky. I drew pictures. That was something I could do by myself. And for years I drew what people would have expected me to draw. But then, almost overnight, I found myself ready to give up on trying to be normal. The characters I had been drawing changed from what was considered normal to characters that came straight from my innards. I decided it was time to embrace my weirdness.

It was time for The Rots.

The Rots are twisted little characters that don’t even attempt normality. They are who they are and I think they enjoy it. And I think other people out there must, too. Last check, 4,000 people out there are liking The Rots Facebook page. 4,000! After seeing The Rots for the first time on Facebook, a person I used to think of as a childhood friend asked me, “How did this happen?” as if it wasn’t normal.

I never got back to her. 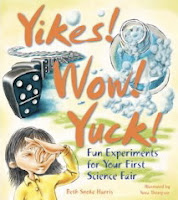 The first book I ever illustrated was called Yikes! Wow! Yuck! Fun Experiments for Your First Science Fair, and I probably wouldn’t have gotten the job if the art director had thought I might have been normal.

I wrote and illustrated my first book, and that wouldn’t have happened if I was living the 50% gray life of normality. The book is called Twisted: Tales to Rot Your Brain Vol 1, and the people at the Midwest Book Review like it. So do the people at Publishers Weekly. And Kirkus Reviews. The people at Kirkus liked it so much they asked to do an interview with me.

Forget normal. Normal is overrated. Normal is gray and boring and unflavored tofu. Normal doesn’t get to have this in its office space. (Thank you much, @ParaNorman!)

Do yourself a favor and go see ParaNorman, and every time you read the name “ParaNorman” convince yourself that it actually says, “ParaNora.”

Because, really, it does.