I’ve been paying maybe a little too much attention to the release date of the new ParaNorman movie, and I think time is actually slowing down as we get closer. So to pass the time, I’ve been thinking about my own normalness and whether or not my normal would be acceptable in mainstream circles.

As I was writing this, I realized I had too many things to add, so I broke it up into two posts (unless I find more as I go). Part two should run Friday.

If someone were to look around where I’m sitting now, they would be hard pressed to find a space that didn’t include some sort of inspirational toy. I don’t know how normal it is, but it’s definitely healthy. This is the view right in front of me: 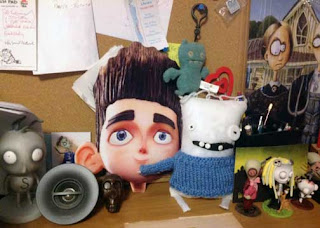 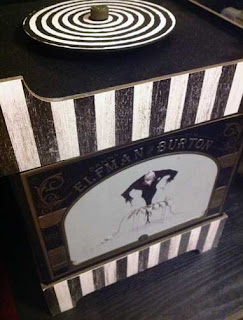 To my left sits the Danny Elfman/Tim Burton boxed set which has its own dedicated table, of course. This is the vault that gets raided when I have to read or write because I have trouble putting words in my eyes or sending them out my fingers when I have words already going in my ears. Mostly music-only, totally minor key. 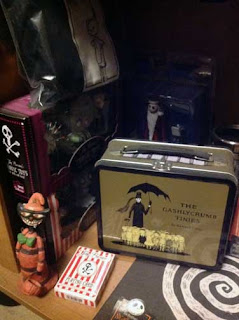 Inside a TV stand that would normally (there’s that “normal” thing again) hold a DVD player and DVDs: Two sets of Tragic Toys; Tim Burton playing cards; Nightmare Before Christmas figurines; and a Gashlycrumb Tinies lunchbox (a gift from my daughter; apparently she’s accepted the twistedness). 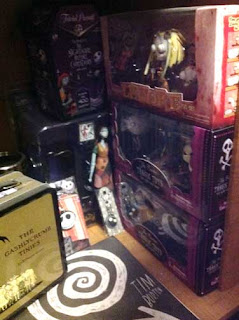 Inside that same TV stand, looking from the other direction you might see the Tim Burton MoMA exhibit program; Nightmare Before Christmas Trivial Pursuit game; more Nightmare figurines, a keychain and a zipper pull (I’ve always wanted to attach that to a zipper, but I was afraid I would lose it, so it’s still sitting in its plastic package); Lenore toys; and two more sets of Tragic Toys. 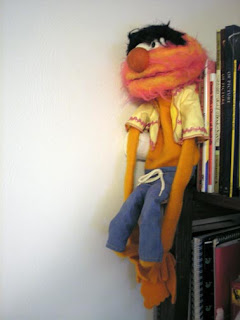 Above me hangs my Animal puppet that I’ve had since the ’70’s (O.K. There’s my age.) Around that same time I wrote in and asked for an autographed photo of Animal, and they actually sent me one. I was pretty surprised when that happened. I still have it somewhere, and when I find it, I’ll post it. 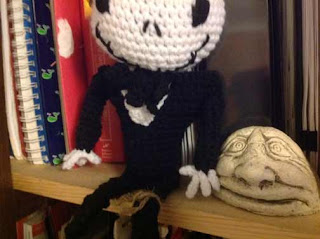 On the shelf below Animal sits a Jack Skellington which was handmade for me by my daughter (I’m not sure the effect I’ve had on her normality) and a face sculpture you’re supposed to put in your garden. I’m not really sure how it works, but I liked his face sticking up from my shelf so he never made it outside.
You know that scene in E.T. where Elliot brings E.T. into his bedroom and starts showing him all his toys? That’s me with somebody new. These are a few of my favorite things, and you’re my somebody new. On Friday I’ll show you more and maybe even a little of how I think I got this way.