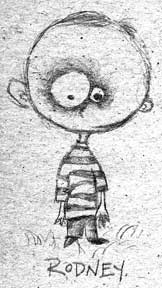 On June 29, 2006 I hiked my first overnighter. I took along a small sketch book and knew before I pulled it out of my pack what I wanted to draw. Until the evening of the 29th, I was a pretty traditional artist. I never stepped too far outside the box and unapologetically blamed fear for the oversight. During the weeks leading up to our hike I imagined the kind of characters I wanted to play with, and that evening I put fear aside and finished drawing the first page in half an hour. They were pretty raw, but eventually they developed into what became The Rots. The very first character I drew was named Rodney, and he’s come to symbolize the anniversary of the birth of The Rots.

Since then, I’ve been drawing new Rots at restaurants while we wait for our meals to arrive, and many of the paintings and drawings you’ll find here began as an unassuming marker doodle on a restaurant napkin. I expanded on the twisted theme and wrote my first book titled, Twisted: Tales to Rot Your Brain Vol. 1, and have included one of my favorite Rots from the book (Doodles) on the Analog Gallery page.

Although I could point to any number of influences, others have made their own associations; over the years The Rots have been compared to the work of Edward Gorey, Charles Addams and even Tim Burton. All company worth stepping outside the box for, I would say.