DV8 had the opening last Saturday of the exhibit where my drawing “Leonard the Clown” is hanging. It was really crowded, and it was nice to see that, of the ten people who were invited to show there, I personally know two of them (besides me). 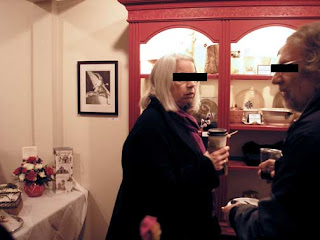 I took a few pictures, but I was trying to be subtle, and I don’t know that the people there really wanted to be photographed. So here’s one of the photos I took with a couple identities skillfully hidden. Notice my drawing is squeezed between a cabinet of things to buy and the food table. Hopefully somebody noticed it there.