While I was online this morning, I did a little surfing around the gallery on the Montana Skatepark Association site from On Deck V (last year’s), and I got an unexpected punch in the gut. One of the decks from last year was painted and doodled similarly to what I had planned on doing on mine.

﻿I sort of had to take a step back to square one, but not so much. I had an idea of what I wanted to do from the beginning, but then got sidetracked when I saw my sketchbook page with all the doodles. I get sidetracked easily. I could still use that very first idea as a backup, even though I hadn’t done any sketches for it.

So I went back to the studio this afternoon, sanded the wood fill down from yesterday, and started coating the board with gesso. While the first coat was drying, I played with some new color mixtures for a background. When I first thought about this idea, I couldn’t see it with any other background other than purple. Not sure why. I don’t really use purple, but there you go. 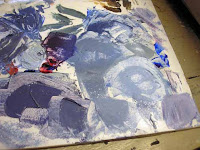 The new mixtures are a combination of Ultramarine Blue, Alizarin Crimson, Payne’s Gray (which is bluer and grayer than the swatch in the link shows), Utrecht Unbleached Titanium (different than Liquitex) and Titanium White.

While the second coat of gesso was drying I started playing with some sketches of that original idea. At first I was going to do the skeleton version (on the upper right), but I played around with the little guy on the bottom left, and now have decided to use him for my final painting.

One more coat of gesso, and I’m as far as I can go until it’s dry.