On June 29, The Rots will be celebrating their fifth-year anniversary (or should that be birthday?). Woo-hoo and all that sort of thing. It was on that date back in 2006 when I drew the very first Rot ever:

Seeing as how he’s five years old now (and all grown up), I thought it would be a stellar idea to paint him for the occasion. The problem is, The Rots have grown up quite a bit since Rodney was born, and I decided to give him a bit of an update. 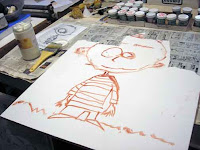 I’m painting him on a 24″x30″ board (birch), and decided to try to step outside my comfort zone a little. I’m adding some collaging into the mix and also using colors that I normally don’t. First up, I sketched something close to the old version of Rodney on the board, just for me. Except for this photo, nobody will even know he’s there. I ended up covering that sketch up in the next step. 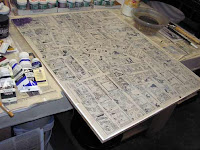 After that, I completely covered the board with comic strip pages from our local newspaper (the Pittsburgh Post-Gazette). Not only did that give me a texture of comics to paint over, but it also gave me a physical texture of wrinkles and gel medium-textured brush strokes to catch the paint, which worked out perfectly. 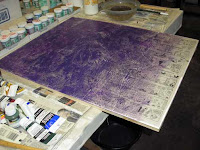 Next I worked on the background. My original plan was to paint the purple as an underpainting for an off-white sky, but I liked the color so much it pretty much stayed. 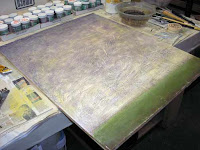 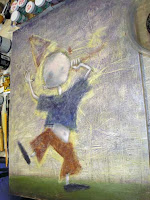 Then I sketched in the new idea I had with a little of the yellow I was using, fully intending to leave whatever yellow marks that didn’t get covered up with further paint as-is (we’ll see if I change my mind later).

After that I just started filling in the blanks. Tomorrow I’ll finish his skin tones with some much darker shades before I move on to whatever part of the painting I decide to tackle next.