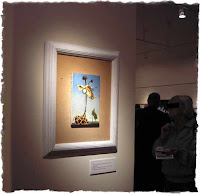 So I went and entered “Jeeraffe” in the Southwestern Pennsylvania Council for the Arts Annual Juried Art Exhibition. I (honestly) believed the juror would have a good laugh when he saw it, and maybe even call somebody else in the room so that person could have a laugh at me as well. And then he would toss my entry in the “rejected” pile and get on with his life.

But life doesn’t always turn out that weird “normal” way, and that juror, in that little room, decided that, in spite of all the other legitimate paintings he had already tossed in the “rejected” pile (mine included), “Jeeraffe” was worthy of being included in his little show.

No, I’m not kidding.

I really don’t think they understand the point of The Rots. I’m hoping this doesn’t make them legitimate now; that would be the kiss of death.

The show’s opening reception was November 29 at the Southern Alleghenies Museum of Art in Ligonier, and the picture up above here proves everything I just said. They even gave him his own wall with his own lighting! (My apologies to the lady who found her way into the photo.)

And, strangely, the words “cute” and “adorable” came up several times…

The show runs November 28 through February 14, and the SAMA Web site is the next thing you’ll read: Link: http://www.sama-art.org/ex_ev/ligonier.htm