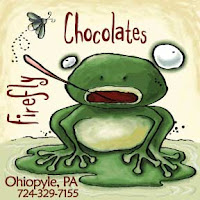 I created a character called “Fraug” for my friends at Adventure Foods who used it on stickers for some Firefly Chocolates packaging. I originally created the firefly as part of their logo, and we thought it would be funky if we had Fraug eating him. They’re so twisted, I’m thinking they were the ones who actually came up with the idea.

The stickers are only 2″x2″ but they liked them so much they asked me to design a full-sized poster featuring the image. They decided they wanted to use Fraug as part of their marketing campaign geared toward their extensive kid’s line of sweets. 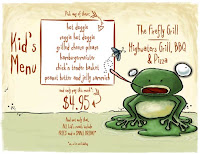 The poster stands 23″x36″ and they liked it so much they asked me to design a kid’s menu/place mat for their restaurant, The Firefly Grill.

And it gets better. Fraug is available on a bunch of stuff for sale on CafePress!

Then in the ceramic line, there’s

If you would like to see him on other products that aren’t currently available, just let me know. I’m flexible.