As you may (or may not) have noticed, I’ve failed to post the finished version of my April Fool Square Kat, and there’s a perfectly good reason for that.

While I was in the middle of painting the little tyke, I stopped to check my email and found I had gotten one from a representative of the Toonseum in Pittsburgh. He told me about this thing they’ve been doing for a couple of years now in conjunction with East End Brewing, also in Pittsburgh. The brewery creates a limited edition beer (Belgian-style, dark ale) called Illustration Ale, and they ask six illustrators to create the labels to make a “six-pack.” Then—and here’s the best part—he asked me to be one of the illustrators for this year’s batch!

And then I thought, oh crap. Now I have to come up with an idea.

Right about then I went back to painting, and as I thought about what I could come up with, the little guy on the board in front of me showed me how cool he would look with a stein in his little paw. 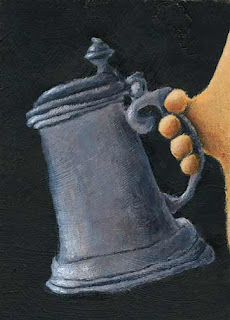 He’s such a boozer.

I’m obligated to hold out on posting the complete final painting until after the unveiling (which should be within a couple of weeks; the beer’s still brewing), but here’s his little stein paw while you wait.

Will reveal the rest at a later date.